I’m adding a new demo to my portfolio, a TPS procgen game called Balance. It had been one of my longest running side projects and I felt it would be a nice addition.

Balance started out as a farming/crafting game set in a procedurally generated forest where the player would fight a dark corruption force and cleanse the woods. The scope of the project was kinda big and I abandoned it for quite a while after a few months.

Recently I wanted to expand my portfolio and Balance seemed the right candidate. I cut out most of the features and tried to make an essential version which has the basic features in place and is playable in itself.

So, here is a really early alpha of the game: it is possible to roam around a procedurally generated (albeit not ‘endless’) world controlling a golem, fighting huge, procedurally animated spiders and collecting some powerups. The assets are mostly free or from the asset store as I am still not much of a 3D artist :).

I’m definitely planning to expand this idea further and possibly write posts about the things I have learned (and failed at) during its development. 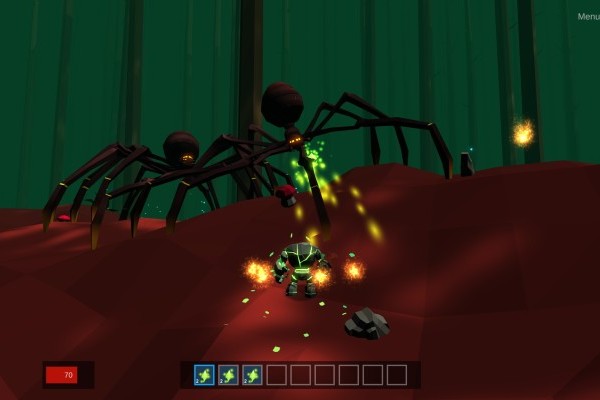 Screenshot from the first alpha demo

I’m definitely planning to expand this idea further and possibly write posts about the things I have learned (and failed at) during its development.

Kudos to all those really cool tutorial resources which helped me a lot during the project: